Searching for Integrity! by DL Larson 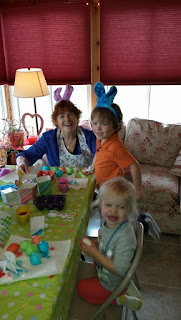 This picture was taken last week. My grandchildren and I had a good time painting Easter eggs. We look pretty carefree, yet I've been worrying quite a bit lately ... what does the future hold for our young ones? In the last six months there have been over sixty terrorists attacks around the world.

I know this blog is supposed to be non-political and non-religious. But I can't help wondering if all these polite rules have been a hindrance to us as a nation. 'Don't talk politics or religion in polite company.'  I grew up hearing this rule over and over. I tried to adhere to it most of my life, and I wonder if I should have stood up long before now to say, 'where has that attitude gotten us?'

As a writer, I want to express my frustrations, yet there seems to be so many problems facing us as a nation, I'm ashamed I haven't spoken out sooner. I speak as a wife, mother and grandmother, neither Republican nor Democrat. I'm not a very political person, but I want my country strong so my grandchildren will inherit a great country, not one that has slid into despair and desolation.

I want my politicians to have integrity. That's right. It really boils down to that. Where has the integrity of the government gone? I realize a public entity may not hold personal values, but the people who are in charge sure should. It's one of the main ingredients that made this nation great. It's all but disappeared and we, the people, let it slip away because we've all been so blessedly polite. Or maybe we weren't paying attention when we should have been keeping a closer eye on our government and its actions.

I want my government to take action in protecting our borders. I want an easier avenue to citizenship for those who are here illegally and want to stay. I relate this to some young man or woman stepping out of the closet and admitting to the world they are homosexual. The world didn't end with their confession. Their life changed, and I pray, for the better. No more secrets. Illegal immigrants need a path to become a working, thriving part of our nation.

I want our soldiers to receive the benefits they need and deserve. The fact that our congressmen and senators have lifelong benefits and our soldiers don't, irks me. This is wrong. We hear VA hospitals are helping out more and improving. I personally know they have not in my area. Let us not grow lazy in believing the propaganda that is being delivered to us by the very folks that allowed it to happen in the first place.

I want a safer world, free of tyranny and terrorists. I know I'm asking for the moon, but if integrity were instilled to all at a young age, maybe our world would not be littered with this disease of  'my way or no way.'  Perhaps we would learn to tolerate our differences. Perhaps we could be happy with our own chunk of the world and not believe we are entitled to take more without asking.

Book Beat Babes is a group of writers with followers who are mainly writers. So I challenge you, start writing to your Congressmen, your Representatives and Senators. Make your values known. Be attentive to the world around you. Speak up. It's time ~ way past time ~ we start using our talents to let our thoughts be known in a public way.

Below is an web address to the Federal Representatives. It lists all by state.
http://www.house.gov/representatives/
Here is a site for Senators:
http://www.senate.gov/senators/contact/

Speaking up is scary. But as writers, we have the tools to start a conversation that could bring about change. I want a secure future for my grand kids. I don't want them growing up with threats of terrorism, bombs in public places, or afraid to play in their backyard for fear of what might happen if a car drives by. Stray bullets and angry mobs will not fix our problems. Integrity, even in small doses, feeds the conscious to act more civilly. It's a small, but significant step toward a brighter future.

I've been searching for possible agents and publishers lately. I've come across at least a dozen who are closed to submissions. Sigh ... it's frustrating yes, to finally find a possible agency that might fit my type of writing, only to find the door closed before I've had a chance to inquire.

I also found a few disturbing remarks. Yes, most don't bother returning a 'no thank you, not interested' note. I came to terms with that long ago. Others want only inquiries that have been sent solely to them and no one else. They state they will respond within four to six months. Really? Still? In this day and age. I don't know anyone who actually believes this anymore. I used to play by the rules and wait and wait ... and wait, only to realize it was time to move on.

The one that bothered me the most was on the Alloy Entertainment site. They sound reasonable and interested in hearing from all types of writers. That's wonderful, but this is from their Submission Guidelines:

It's the last sentence I have an issue with. It sounds dangerously close to stealing. They may not like your work, but they like your theme, your plot, your characters. Where does that leave you, the writer, if they steal your work?