Roald Dahl, A Tribute To His Legacy! by DL Larson

He didn't begin his writing career until after his children were born. He wrote in the small hut (pictured) at the edge of his garden. And my favorite, since I too favor this technique ... he wrote in pencil on yellow paper.

Roald Dahl was born in Wales, 1916. He was a fighter pilot in WWII. Much of the world will celebrate his 100th birthday this summer. Disney has The BFG coming out in July, directed by Stephen Spielberg. If you'd like to watch the trailer, google: Disney's The BFG. The official trailer will come up.

I received a poster at my library as a promotion for the upcoming movie. We still have the book, The BFG, in our classic section. I brought it home to read. The story comes to life immediately with an orphan girl being abducted by a giant. From there the action keeps going. I'm not quite finished, but I do believe the Queen of England will take a significant part in the resolution of the story.

This book is exactly what I've been looking for my upcoming summer reading program. This book will fit nicely with our theme "Challenge Yourself - READ." The story is full of action, misunderstanding and misconceptions, with a 'try at all cost' emphasis. Dahl subtly shows the reader how narrow-minded we human beans are.

Dahl reminds me of Dr. Seuss with his whimsical made-up words. In The BFG, the giant taught himself how to read, and although his speech pattern is a bit roughysided, he's understandable!  It's scrumdillyious. And a twister to the tongue at times. Dahl created or made up 238 words in The BFG. He called it gobblefunk.

Many of Dahl's books have become movies. He wrote the screenplay for Chitty Chitty Bang Bang, as well as You Only Live Twice. He wrote adult fiction, specializing in short stories for magazines. His work could be found in Ladies Home Journal, The New Yorker, Playboy, and many others.

Another thing I admire about Roald Dahl: Writing and English were not his best subjects in school. Oh, how I love hearing that about other authors. My English teachers in high school and college repeatedly told me I was too chatty with the readers. I believe I was blogging and didn't know it! Another told me it felt too much like a movie in her head. One of Roald's grammar school teachers wrote on his report card: "I have never met anybody who so persistently writes words meaning the exact opposite of what is intended." (taken from mentalfloss article/527-17/11)  Such is the life of a writer who prefers imagination over perfection.

Roald began writing at a request from another writer, C.S. Forester, who was looking for a story about a soldier who had been on the front lines during the war. Dahl agreed to write something and ended up writing an article he called, "A Piece of Cake." He was paid $1,000. The title was changed, but not much else. The article came out as, "Shot Down Over Libya."

Have you read any of Roald Dahl books? If so, what is your favorite? Have you seen any of the movies?
Do you remember any of his jumbly words? 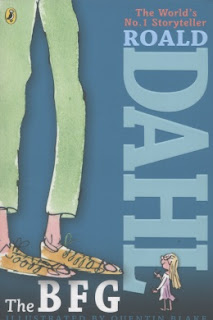