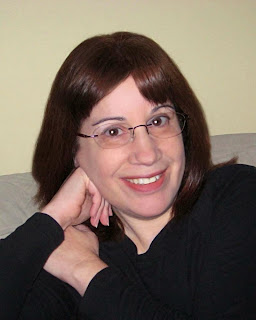 In addition, Lois is a literary agent and an award-winning craft and needlework designer who often draws much of her source material for both her characters and plots from her experiences in the crafts industry.

Early in my writing career I received a valuable piece of advice that I have always followed: Never end a chapter with your character going to sleep.

As an author, you never want to give your readers a reason to close your book. You want them to get to the end of the chapter and be so involved in your story that, no matter how tired they are, they absolutely, positively must turn the page to find out what happens next. This is known as the chapter-ending hook.

The chapter-ending hook is a great way to keep your readers turning pages, but what happens when they come to the last page of your book? If you’re writing a series, you want readers to pick up the next book in the series. One way to do this is to employ a cliffhanger ending.

The cliffhanger format was used with much success in the early days of cinema. Along with two weekly feature films, theaters would screen serials, longer movies that were broken up into weekly episodes. Each episode would end with the hero or heroine facing imminent death. Common scenarios included, among others, the hero or heroine dangling over the edge of a cliff (a literal cliffhanger and source of the term,) trapped in a burning building, tied to railroad tracks as a train steamed toward them, unconscious in a plummeting airplane, or bound to a chair and staring helplessly at a lit stick of dynamite. Moviegoers would have to return the following week to see if they escaped in the nick of time. They did, of course, but only to be plunged into a new peril at the end of that episode.

Cliffhangers have continued to be popular, especially in TV shows where it’s common to end a season leaving viewers guessing what happens next. Only with television shows, fans have to wait months, rather than a mere week.

Cliffhangers have been around long before television and movies, though. In Homer’s Odyssey, book four ends with an ambush being set for Odysseus’s son Telemachus, but readers don’t learn what happens to Telemachus until nearly the end of the next book.

As a writer of a mystery series, along with wanting readers to keep turning the pages of my books to find out what happens next, I want them to buy my next book, along with every other book in the series, as I continue to publish them. One way I do this is to employ a cliffhanger at the end of each book in the series.

Of course, I don’t keep the reader hanging as to the identity of the killer. I know that every book must have a resolution to the plot, and by the end of each of my books, my amateur sleuth has figured out whodunit. Mystery readers don’t want to get to the end of a book to find the murder hasn’t been solved or the killer hasn’t been caught. That’s a surefire way to lose readers.

However, I take a page from old movie serials by setting up the next book at the end of the preceding book. I do this with ongoing character arcs. My books end with a cliffhanger involving one of the continuing characters in the series. This becomes the lead-in to the murder that occurs in the next book. I’d give you examples, but I’m not one to supply spoilers of my own books. I’d rather have you read the books to find out for yourself. (How’s that for a cliffhanger ending to this article?) 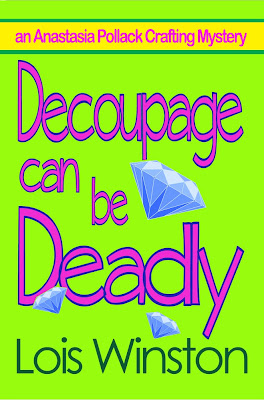 About Decoupage Can Be Deadly
by Lois Winston
In the fourth Anastasia Pollack Crafting Mystery, Anastasia and her fellow American Woman editors are steaming mad when minutes before the opening of a consumer show, they discover half their booth usurped by Bling!, their publisher’s newest magazine. CEO Alfred Gruenwald is sporting new arm candy—rapper-turned-entrepreneur and Bling! executive editor, the first-name-only Philomena. During the consumer show, Gruenwald’s wife serves Philomena with an alienation of affection lawsuit, but Philomena doesn’t live long enough to make an appearance in court. She’s found dead days later, stuffed in the shipping case that held Anastasia’s decoupage crafts. When Gruenwald makes cash-strapped Anastasia an offer she can’t refuse, she wonders, does he really want to find Philomena’s killer or is he harboring a hidden agenda?